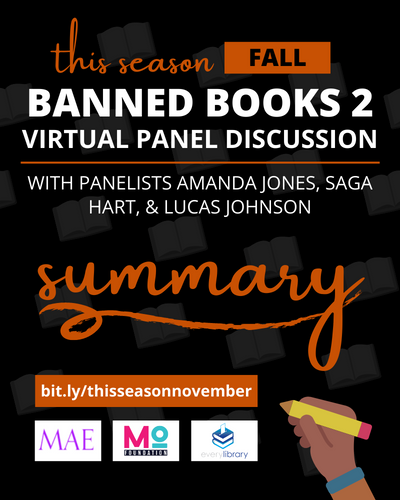 “There are not as many BIPOC or LGBTQIA+ characters depicted realistically in media as there are depictions of white, cisgender men. This can lower students’ self esteem and make them feel isolated, like they are the only person who shares their lived experience.”

Welcome to the second installment of “this season,” a storytelling program by March On Foundation (MOF) and Mae created to bring experts and the community together to discuss the most pressing issues of the season.

As summer has wound down into fall, book bans continued to be one of the greatest concerns of educators and advocates across the nation. Our debut episode “this season: banned books” focused on the ins and outs of book banning and who they most impact. This fall, we wanted to hear from those suffering from the fallout of these bans: librarians, students, and other educators trying to navigate the censorship as they teach and learn.

To that end, our panelists this fall were:

Moderator Courtney Young, founder of Mae, began with a startling statistic from PEN America: between July 2021 and June 2022, approximately 1700 unique book titles were banned in schools and libraries in the United States. In Amanda’s experience, people who approve of book bans use them as a political tool: last year, it was an attempt to bury America’s brutal history of white supremacy by vilifying Critical Race Theory (CRT). This year, it is a tool to attack LGBTQIA+ people under the guise of protecting children from “groomers.”

But these bans do nothing to protect children – they only expose kids from already targeted groups to further harm. As Saga pointed out, there are not as many BIPOC or LGBTQIA+ characters depicted realistically in media as there are depictions of white, cisgender men. This can lower students’ self esteem and make them feel isolated, like they are the only person who shares their lived experience. Book bans send a message that we don’t like who you are or people like you, and we don’t want to accept you.

It can be just as difficult for educators: school administrators will often ignore educators in favor of placating angry parents. Teachers and librarians are the least heard, yet they are the first to receive backlash: Amanda has faced harassment, death threats, and doxxing as a result of her advocacy against banned books. She learned the uncomfortable truth that people, even in your community, are more close-minded and quick to vilify those they disagree with than you think.

Amanda explained that a lot of teachers and school librarians are being pushed into “soft censorship,” as attacks against people fighting book bans tend to become so personal and cruel. Before making a decision on selecting books to buy or show, they think of the pushback they might get from it instead of feeling free to teach to the best of their abilities.

So how can we support teachers, librarians, and students fighting against book bans? Amanda and Saga suggested:

As with our summer program, one of the most important questions was on the panelists’ favorite banned books! Amanda absolutely loves The Undefeated by Kwame Alexander, New Kid by Jerry Kraft, and anything by Jason Reynolds. She also had specific banned book recommendations for learners of all ages:

Saga’s favorite banned books included Gender Queer by Maia Kobabe; The Giver by Lois Lowry; The Absolutely True Diary of a Part-Time Indian by Sherman Alexie; The Hate U Give by Angie Thomas; This Book is Gay by Juno Dawson; and anything by Toni Morrison (a sentiment shared by previous panelist Ansley Moon!). Saga emphasized that banned books just have a different edge to them that make them so interesting and informative.

As both our summer and fall editions of “this season” show, the impacts of these bans don’t stop once the books are stripped from their shelves. Allowing books to be banned or otherwise censored only perpetuates the cycle of ignorance and violence ingrained in the American governmental system. It is one of many tools used to maintain a hierarchical system of white supremacist patriarchy.

Watch the full panel on Facebook, and sign up here for exciting updates, and stay tuned for the winter edition of this season coming in 2023!