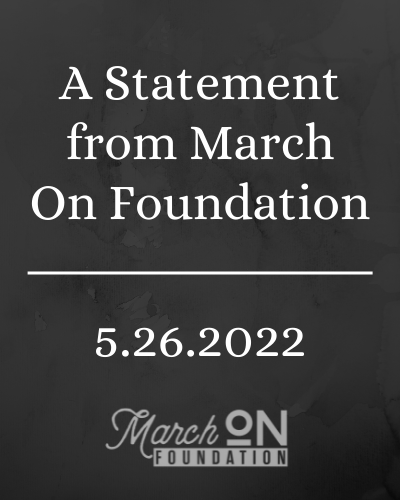 A Statement from March On Foundation on the Mass Shooting in Uvalde, Texas

On May 24, 2022, 19 children and 2 teachers were killed in a mass shooting at Robb Elementary School in Uvalde, Texas. We did not want to issue another statement about a mass shooting so soon after last week’s event, and yet here we are.

There are certainly many factors that contribute to the current gun epidemic in our country, but let us just be blunt:

There are too many military-grade firearms available to untrained civilians in the United States.

There is an embarrassing lack of regulation regarding who is allowed to purchase guns and when one loses the right to have guns in the United States.

The Second Amendment to our Constitution is obscenely outdated. It has no allowance for how guns have advanced technologically (how what could once kill one person every few minutes can now kill several people in seconds).

We are failing to uphold the standards that the Founding Fathers laid out for the Constitution, as they intended for it to be updated regularly.

So many of these shootings are racially motivated, and this fact is perpetually swept under the rug.

The time for thoughts and prayers is over. It should have been over in 1999 when a mass shooting killed 15 students and staff at Columbine High School; but now, 23 years later, the United States has seen at least 213 mass shootings just this year. At least 27 of them were at schools. What occurred at Columbine is now the norm in the United States, and too many of our elected officials allowed it to happen through accepting donations from the NRA and allowing them to hold gun reform legislation in a chokehold.

We at March On Foundation, as well as our colleagues throughout the nonprofit industry, will continue to do our part to amplify the voices of marginalized communities and push for stronger gun reform (as much as 501(c)(3) status allows). However, we would like to be clear that it is wholly unfair that the government and our elected officials perpetually push the responsibility of advocating for gun safety on nonprofits and grassroots organizers. It is also downright repugnant that the government is shirking this responsibility off to survivors and relatives of victims of gun violence.

This is unacceptable. It is time for our government to step up. It is time to stop making excuses and getting lost in loopholes. How many more of your constituents must die before you make the right choice?