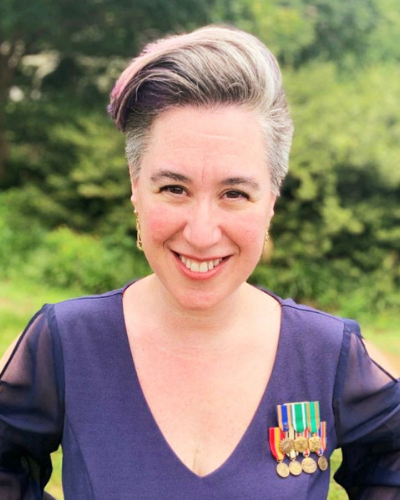 Eve has a distinguished history of serving her country and community. She is a mother of five, combat veteran, nonprofit executive, business owner, interfaith minister, and community organizer. In 2017 she founded March On Maryland, a nonprofit that increases civic engagement, champions first amendment rights, and amplifies the voices of the underrepresented, marginalized, and oppressed in order to empower and support our communities through civic education and engagement.

Eve is also a board member and financial director of March On, a national nonprofit founded by Women’s March organizers across the country.. Finally, Eve is a board member for The Milky Way Foundation, which provides education about maternal and infant health and bonding. All of these nonprofits focus on empowering people, from family health to civic engagement and first amendment rights. Eve received awards from the Martin Luther King Jr. Committee and the Anne Arundel County Council in 2018 and 2019 for her work combating structural racism, and was a grand marshal of the 2018 MLK Day Parade in Annapolis.

In 2020, March On Maryland gained a national face in March On Foundation, which expanded the fiscal sponsorship program that Eve began within March On Maryland. Eve is motivated by a need to serve and fight for the rights of others every day. Eve lives and breathes to maximize our best human potential by instilling love, empathy, and inclusion in everything she does. 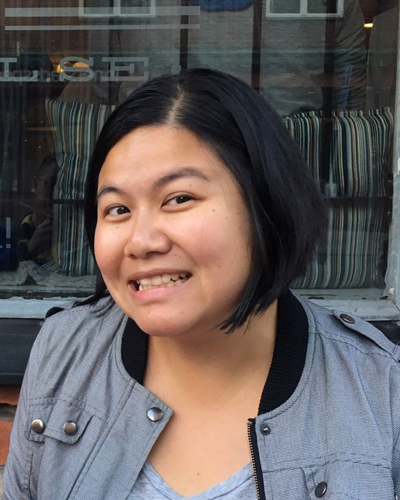 Esther Pang is the founder of Climate Curator, “curated for the naturally curious”, which explores how the creative communities have responded to climate change. Previously, she worked for more than a decade in project management and governance roles at media and finance companies in New York, London, and Prague. She has a keen interest in social entrepreneurship, and specializes in developing impact and sustainability strategies for small businesses and organizations.

She serves on the Board of Directors for Hollaback!, a global, people-powered movement to end harassment. She is also a part of the founding board for Columbia First-Generation & Low-Income Alumni Network, which aims to create a strong, cross-generational community of alumni from low-income backgrounds and/or the first of their family to earn a college degree in the United States.

Esther was a fellow of 2018 Global People’s Summit and 2017 Unleash, both global community of leaders working on Sustainable Development Goals. She received her B.S. in Communications from New York University, and M.S. in Sustainability Management from Columbia University. 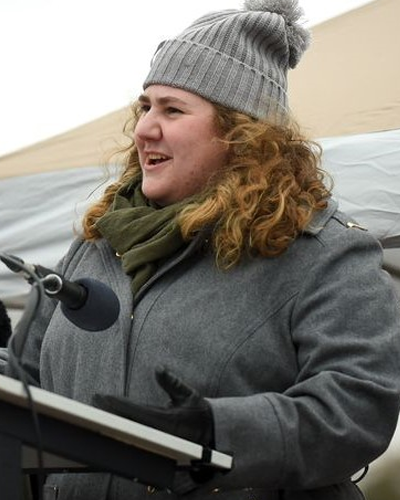 Emma graduated from Washington College in 2017 with a BA in French and International Studies and a minor in History. She has served in numerous diverse roles, including as a Parliamentary Intern for a Member of the UK Parliament in London during Brexit and as an English teaching assistant for elementary school students in Corsica, France. Emma began as an administrative assistant at March On Maryland, the parent organization of March On Foundation, in 2018. In 2019, Emma became Deputy Director of March On Maryland and currently manages most Maryland-based operations. She served as a primary organizer for the Annapolis Women’s Unity March in 2019 and 2020, and is excited to begin planning the 5th march in 2021!

Emma is a passionate historian, principally researching the lives of Dr. Alan Turing and Academician Valery Legasov, as well as the Chernobyl disaster and the European perspective of World War II. Emma is also an avid traveler, having visited 32 countries (and counting!). Emma’s primary mission is to promote the values of empathy and humor in all areas of life and to make this world as informed and equitable as possible.

Alexis Saenz is a mixed raced womxn originally from the Cheyenne, Ute, Arapaho and Sioux Territories, known as so called Denver, Colorado and resides in Tongva, Chumash and Tataviam Territories, known as so called Los Angeles, CA. Saenz is Latinx, Indigenous and White, although she is not sure of her direct tribal nations, she has been adopted to the Indigenous communities in the Navajo and Oglala Lakota Sioux nations. Alexis is Project Manager for March On Foundation. She also organizes with the International Indigenous Youth Council LA Chapter as the chapter representative and volunteers for the EmBrase Foundation.

Saenz graduated from California Institute of the Arts with her Bachelor’s of Fine Arts in Dance and Choreography. When she’s not fighting for the Climate Justice movement, you can catch her teaching dance and pilates and pursuing a career in the entertainment industry as a dancer, filmmaker and actress. Alexis is very passionate about helping her community and people around the globe and hopes to continue this work to make the world a better place for us all.

Alexandra Faltine is the administrative coordinator for March On Foundation. She supports the Operations and Finance teams by developing and maintaining systems and processes. Alexandra also serves as the administrative coordinator for March On, a partner of the Foundation. Before devoting her work full time to nonprofits, Alexandra worked in the festival circuit on Artist Relations teams for major festival brands. She also served as a project manager for numerous live music events.

Alexandra first became involved in nonprofit work because she desired to be a part of something bigger than herself, a movement that would help the country progress into a more sustainable and nurturing future. She considers her biggest strength to be her versatility as a team member and helping others to accomplish their goals. Alexandra’s little pleasures in life include organized databases, warm fudge brownies, and exploring new airports (though not necessarily in that order!).