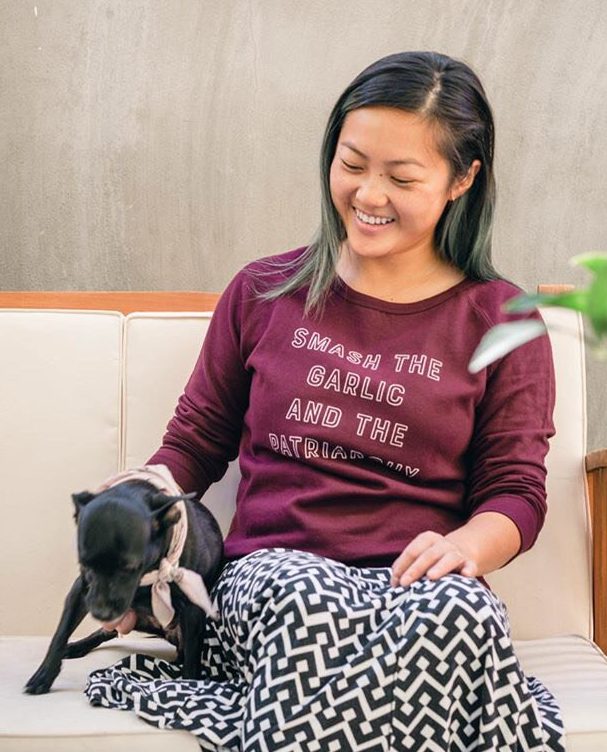 *Audio accessible* “…I don’t think people at large… maybe they understand that or know, but they’re not totally processing what that means in terms of the applicant pool and the kind of privilege to be able to have the fame of having been on Top Chef or a show like that.”

Thank you for coming back for the third and final part of our conversation with Chef Jenny Dorsey! Our discussion concludes with Jenny’s perspective on the representation of the Asian American Pacific Islander (AAPI) community in the restaurant and hospitality industry and what gives her hope in a chaotic world. (Be sure to read Parts One and Two if you haven’t already!)

We had so much fun talking with Jenny and we can’t wait to see what we’ll do together in the future. Thank you again, Jenny, for sitting down and speaking with us!

Jenny is an award-winning chef who competed on shows like Cutthroat Kitchen, Chopped, and Beat Bobby Flay. She is also the founder and executive director of Studio ATAO, a nonprofit that envisions “a world where all people can realize their power to secure equitable and inclusive change.”

Studio ATAO’s current initiative is The Neighborhood’s Table, which takes a deep dive into gentrification and the industry’s unique role in either combatting or exacerbating it. Specifically, it “aims to create a responsible, actionable, and replicable framework for hospitality businesses to organically connect with their local community, collaboratively combat displacement, and invest sustainably in their neighborhoods.” Click here if you want to learn more and get involved with The Neighborhood’s Table.

This interview has been edited for clarity and readability. Be sure to visit our blog again soon for posts about Earth Day and the anniversary of the Chernobyl disaster.

I was reading your newsletter regarding how you were doing all [of] the recipes for prawn chips. It’s very methodical. I didn’t realize that you came from a management consulting background, I feel like the skill set [is] also very analytical. Do you feel it’s the same sort of skill set that you have [transferred] over to understanding where all the levers are in terms of needing systemic change? Is it that same type of mindset of, “This is how I’m going to test the different recipes for prawn chips and this is the result”? Do you feel like you apply those same skill sets in the nonprofit space?

I think yes, the general ethos has carried over where it’s really about working backwards and, of course, understanding your resource constraints and whatnot. Sometimes there’s a little miscommunication along the way, but what the ideal end goal [is] and trying to find how to get there, for the most part I think that stayed the same.

So, for prawn chips, if the end result is [that] you want something light, fluffy, crispy (you have these things in your mind because you already have a prawn chip that you’ve had as a child), then I can say, “If I want things to be lighter, baking soda, right?” I didn’t do this in the [newsletter] that you read, but there was a whole separate study of prawn chips that I didn’t even publish where I said, “If I want it to be lighter, if I want it to be this, I need to dehydrate it.”

I think similarly for nonprofits – if we want change from the ground up, then who should we talk to? Well, we should talk to the people that probably don’t have a lot of power.

How should we talk to them? Right now, we’re doing a lot of work around gentrification where we’re asking, “How do we get things translated? Because a lot of people that are affected don’t speak English or they might feel less comfortable taking a survey in English, let’s make sure it’s in Spanish,” or “We’ve had some requests to get it translated into Chinese or Vietnamese.” Right? Those are things that we also have advisors help us do. Our advisors pointed out that just using “gentrification” in this community survey is leading in and of itself, because people might have different interpretations of that.

So again, working from the end goal, “We just want to capture people’s thoughts around how their neighborhood is changing, then what is the best way to get around that?” Let’s remove the word “gentrification,” let’s talk about… how they are interpreting their neighborhood. For instance, “Do you feel welcome at most establishments that you’re going to? How do you feel about the people that are moving in and becoming your new neighbors?” It’s all related, I suppose. Though sometimes it doesn’t feel that logical.

I love that mindset of even one word can be leading, and therefore being so mindful of something that’s so small to most people. It’s not just a word, it can [actually] really skew what we’re trying to find. I appreciate that…

Under our current state of capitalism there is no very good way to make that a more sustainable model for folks.

If we call representation just numbers, maybe. But the representation in terms of media coverage, as well as proper resources, is definitely lacking and could be improved. Especially since a lot of older AAPI folks, and I think older BIPOC folks, who have restaurants, they may have sustained themselves for decades with a small mom and pop business, but now they’re at this point where they’re older and do their kids really wanna take that over? No, because it’s so not lucrative to run a business like that, unless you’re really passionate or unless you figure out a way to franchise or make it into a chain.

Under our current state of capitalism there is no very good way to make that a more sustainable model for folks.

So, if we really want to take care of people and give them a responsible livelihood through hospitality, I think we need to change that. Not just for AAPI folks, but for all folks in general, because usually the people who are actually making money from food are the Danny Meyers of the world or the people, and…what is that guy? The guy from Papa John’s? Whatever his name is, those people are making plenty of money.

But those opportunities are definitely not evenly distributed, and that shouldn’t be the only way that you can make a living in food. You should be able to run a difficult business, like a restaurant, and make enough to sustain yourself and have a middle-class life. And that is not the case right now.

What is one thing that always gives you hope and joy when things look absolutely bleak?

Probably my dogs. I love animals and definitely love pets. There’s critique around how we’ve managed to domesticate so many animals, but I think what is really beautiful around human-animal connection, at least for dogs, is they are always so happy and willing to be vulnerable. The dog is always happy to see you – I’m not always happy to see my friends or even my husband! I mean, I’m usually mostly happy to see him, but you know what I mean? To have that expression of unadulterated joy every time someone sees you, even if they may be annoyed by you. I just go and pet my dogs and it reminds me that things are good in the world.

What kind of dogs?

One is, I think, a little rat terrier/Chihuahua mix. They’re both rescues, so we’re not sure, but she’s this black little thing with big ears. And then we have a pit bull, [and] he’s a big boy. He’s 75 pounds. His name is Piggy, he is just an oaf!

I don’t know, because a lot of that TV is set up and they told me explicitly that they wanted to find an Asian chef because Bobby’s not well-versed in Asian cuisines and ratings do better when Bobby loses.

And I’m not saying that they conspired to make him lose, because it seemed pretty unanimous from the judges that Bobby’s dish wasn’t as good as mine (I mean, I like to hope, f*ck if I know). But definitely the goal was to have Bobby lose and they achieved it.

And the goal was to have Bobby lose so that they could have ratings, so in the end Bobby wins, right? It doesn’t matter how this plays out, Bobby wins and makes money. I didn’t get paid for that day. So…you know. Ha.

I’m so shocked by that!

So, Beat Bobby Flay, you don’t have prize money. If you win Chopped, you win money, but you don’t get paid for the day. That’s something I wrote about for WaPo [The Washington Post] two years ago, about how people don’t realize the opportunity cost, the privilege inherent in even getting on to something like Top Chef. You have to give up six weeks of work and you might not be able to go back to work. If I was working for someone else and I just called up and said, “Bye, I’m going to be gone for six weeks.” They would respond, “Okay, well you’re fired.”

Especially if you work at a restaurant, if a line cook calls their boss and says, “Peace!” They don’t have a job to come back to. So anyway, the privilege inherent in even going on those shows and having an opportunity to participate is quite high. And I don’t think people at large… maybe they understand that or know, but they’re not totally processing what that means in terms of the applicant pool and the kind of privilege to be able to have the fame of having been on Top Chef or a show like that.

That is an amazing answer. I want to be respectful of your time, so thank you very much for being here with us today and taking the time to talk with us and being vulnerable with us because some of those answers were vulnerable. It’s always a delight to talk to you and to swap ideas.

Well, thank you so much. I’m so happy to be a part!

Thank you so much, it’s always a joy to speak with you!