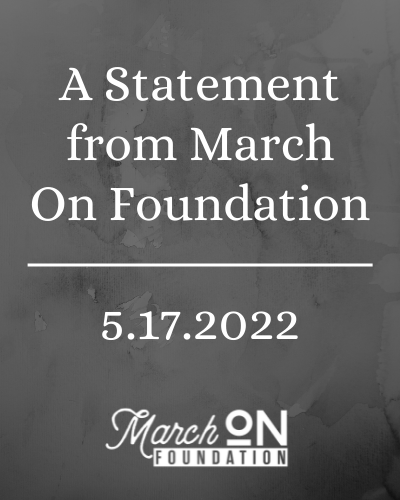 *Audio accessible* “One of the best and most powerful ways to do this is through telling the stories of those who are most exposed to the brutalities of white supremacy… every story shared from the Black, Brown, Indigenous, LGBTQIA+, disabled, immigrant, and female communities is an act of resistance.”

March On Foundation has been devastated to continuously read story after story this past week of the shootings in Dallas, Buffalo, and Laguna Woods impacting the Black and Asian communities.

Since the beginning of COVID, we have seen a dramatic increase in hate crimes against the Asian American Pacific Islander (AAPI) community. According to the Center for the Study of Hate and Extremism, anti-Asian hate crimes increased 339% from 2020 to 2021. This follows a prior increase of 124% from 2019 to 2020. This is arguably a direct result of an increase in racist language towards the AAPI community by elected officials after the rise of coronavirus.

Simultaneously, other disenfranchised groups have been experiencing more hate crimes as well: the nation saw an 11% increase in suspected hate crimes in 2021. NBC News reported: “The report also found that Black Americans remained the most targeted group across most cities. In New York, the Jewish community reported the most hate crimes last year, with researchers, in part, linking increases to the three-week Gaza War in May. In Chicago, gay men were the most targeted. In terms of location, Los Angeles ‘recorded the most hate crimes of any U.S. city this century’ in 2021 alone, with New York coming in just behind it.”

Despite whatever the official line becomes from law enforcement or government entities, we all know what motivated these heinous attacks: white supremacy. The entire American governmental system was purposefully built to maintain a white supremacist patriachal state that systematically uplifts wealthy, cisgender, heterosexual, able-bodied white men while suppressing literally everyone else. In recent years, we have seen an increase in racist language towards all communities of color from many in power at the highest levels of government, as well as the increase in hate crimes mentioned above.

This is evident even in descriptions of the perpetrator of the most recent shooting in Buffalo. As NPR reports, “When Michael Brown, Black and 18 years old, was shot by a white police officer in Ferguson, Mo. in 2014, the AP referred to Brown as a ‘man’; after the Buffalo shooting Saturday, the same news organization referred to the suspect as a ‘white teenager,’ as scholar and journalist Steven Thrasher pointed out on Twitter.” It has been shown in many studies that Black children as young as five are often perceived as being older (and therefore less innocent) than they really are in comparison to white peers.

It is crucial that we call out this system and its supporters within corporations and the government if we ever hope to dismantle it. One of the best and most powerful ways to do this is through telling the stories of those who are most exposed to the brutalities of white supremacy.  This system was built to encourage ignorance when it comes to the lived experience of others, but every story shared from the Black, Brown, Indigenous, LGBTQIA+, disabled, immigrant, and female communities is an act of resistance.

Our hearts and thoughts are with every victim of these recent shootings and their loved ones, including those now dealing with trauma from the event. We will continue to prioritize sharing and uplifting the stories of marginalized communities.

The March On Foundation team