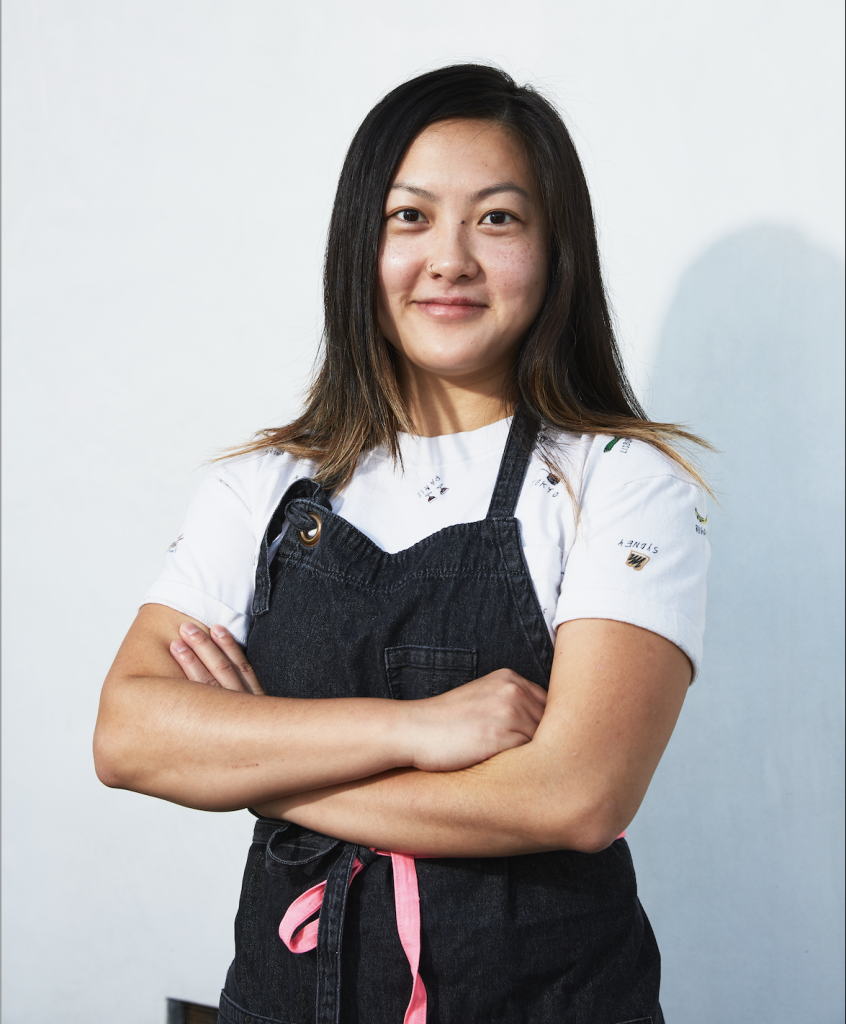 Acts of Care: A Conversation with Chef Jenny Dorsey (Part One)

On January 28, MOF Executive Director Esther Pang and Digital Content Director Emma Buchman sat down with  Jenny Dorsey, a chef and activist known for competing on Chopped, Top Chef, and Beat Bobby Flay. She is also the founder and Executive Director of Studio ATAO, an “award-winning 501(c)3 nonprofit that creates educational tools, resources, and spaces for individuals and organizations to advance systems-based change through a social justice lens and the all-affected principle.”

Studio ATAO’s newest initiative is The Neighborhood’s Table, which “aims to create a responsible, actionable, and replicable  framework for hospitality businesses in gentrifying areas to organically connect with their neighbors, collaboratively combat displacement, and invest sustainably in their neighborhoods.”

They’re currently conducting a survey to guide further research for The Neighborhood’s Table! Click here to include your voice today.

This interview has been edited for clarity and readability. Parts two and three will be coming soon!

We wanted to first ask you – at what point did you decide that you wanted to be a chef? And was there a transformative moment that pushed you in that direction, or was it more of a slow development of an interest into a passion?

Yeah, so food had always been a central part of my life growing up. I had very much…organized my life around food. So whenever we did family vacations, you know, I would plan all around going to eat. And I was just talking to Alicia Kennedy, if you follow her work, we were doing a podcast for her newsletter and I was saying how I remember when I think when I was 10, my family and I decided to go to Las Vegas. My family loves Las Vegas, not for gambling, but for eating. And so I had planned a little itinerary for us and I just remember giving the itinerary to my mom and my mom saying, “There’s just no way we can eat at all these places, it’s way too much food!” But that has kind of always been my vibe.

I want to try as many things as possible…There’s nothing as exciting as getting to eat something new, and there’s nothing more disappointing [than] when the thing that you’re really excited about didn’t taste that great; but you know, that’s a side problem. So food had always been really important to me, but my family just never saw it as a real career. And so I never contemplated or thought about it as a career, right? And you also just don’t see that kind of coverage in the media. You see plenty of, you know, maybe doctors and lawyers and business people, but you don’t, especially at the time, you don’t really see chefs getting elevated to that celeb status that they are now. Not that that’s necessarily a good thing, but you just don’t even see it at all.

I guess I didn’t even realize that was a real career, and so I started my career in management consulting. I was within the fashion and luxury sector, and I think I very quickly realized not only did I not like that sector, but I felt very sad for the partners that I often worked with. Which I mean, I’m totally editorializing their feelings, I don’t know, maybe they’re very happy and content with their lives, but every time I interact with them I just felt this mounting sadness of, you know, are they really happy with what they’re doing? Are they really finding fulfillment in it or are they really filling that hole in their heart with shoes and clothes and whatever? Because all [of] the partners that I worked with- most of them were women and they were beautiful and very thin and very fashionable, but…it didn’t seem like they were very happy, you know?

I think at some point I kind of woke up and was like, “What is going on? I’m deeply unhappy. And I just need to do something.” So, the natural outlet I found was through cooking.

I think that’s just a general statement: being well-dressed and very thin does not bring you happiness. I was waking up all the time just miserable and I was also developing so many issues during that time. I was really having issues with eating and my weight. I was doing a lot of binge eating. I went to a hypnotherapist to stop binge eating. I had this thing on my fridge that said, “Nothing tastes as good as thin feels,” which is a really famous Kate Moss quote. And we worked around the corner from the Christian Louboutin store in New York, it’s in West Village. And I remember being like, “If I get down to 95 pounds, I can go buy myself a pair of Louboutins!” And it was just a very unhealthy sort of spiral.

I think at some point I kind of woke up and was like, “What is going on? I’m deeply unhappy. And I just need to do something.” So, the natural outlet I found was through cooking. I went and started doing these intense classes at the Institute of Culinary Education, and immediately was like, “I love this, but I don’t wanna take the beginner courses anymore.” You know? I want to fabricate my own lamb, I don’t want stuff just sent to me…and I’m compiling, right? Because they make things easy for the recreational students. So I decided to actually start and do a diploma program at that same school. And at the time I had already been accepted to Columbia Business School; so I had this in-between period where I was…still working but I went to culinary school in the evenings.

Wow. That’s so interesting. That’s so amazing. Thank you for that answer, it was such a great and vulnerable answer.

Yeah, I think it’s bad when you look at people who are supposed to be your seniors and you feel, really a resounding- I don’t want to call it pity, but a really resounding, you know, stirs up sadness in you.

Yeah, yeah. And I was just going to say when you were mentioning…if that was the feeling you were getting from them, then maybe they’re happy, but it’s not compatible with you…

Right…that’s a really good way to put it…that’s not the happiness that I wanted.

Yes. But I don’t think they’re happy, just to be clear.

Yeah. I mean, it’s very hard. I’ve said this a few times… So, story is [a] partner…once she came into the office, I just remember this so vividly, because we were all in New York, but she came from Boston. So usually she came with suitcases and stuff. And then once she came with her suitcases and this giant garbage bag and we were like, “What is in there?” And she’s like, “Oh I stopped by a sample sale on the way here,” because in New York, like in Chelsea Market, there’s always those sample sales… We had this important meeting that day, and she was like, “Yeah, I was busy and I couldn’t try anything on at the sample sale, so I just told them to give me one of everything in my size and I’ll look at it later.”

…Literally she had so much sh*t with her. And then I was like, “Wait, what if they don’t fit you? What if you don’t like it?” And she was like, “Oh that’s fine.” She wasn’t going to return it! You can’t return things on the sample sale. And I think a lot of the women interpreted that as like, “Wow, so cool. You have all this money, you can do whatever.” That was aspirational. And I thought that was… kind of f*cked up. You know what I mean? Usually the joy of acquiring something is you look at it and you think about it, there’s so much when you have so little…

It was like acquiring for the sake of acquiring it…

Well, going back more to the positive note of the thing that you found inspiration from in this time, and you touched on this a little bit before, but I wanted to dig more into what does food mean to you as a chef, an activist, and as a person? [Are there] different meanings for different sectors of your life or is it just one comprehensive meaning?

I think overall food is an act of care. Cooking is an act of care. You know, eating is an act of care in different ways. Food can take on so many different meanings, which is why people care about it so much. It can very much be a really loving act of care, but also it can be a very negative, really painful, really like… it can stir up a lot of things. For moms who are head of households, (because often it’s moms who have to cook for their kids while they’re running around doing other things), it’s this act of care that’s forced upon them and they can’t escape from. And it’s really exhausting and you know, women’s labor is never compensated. That’s a whole thing that is wrapped up in food too.

There’s also the act of care in hospitality where you’re taking care of guests, and sometimes that’s reciprocated and sometimes that’s not. I think, to me, what is so beautiful and important about food is being able to see that food really can span the whole spectrum of our emotions. There [are] whole books around what people eat when they’re grieving. That is an important part of the grieving process, is what people bring over and how you’re eating it, and when you might consume it. I’m Chinese American, and, obviously, in Chinese culture,  you also bring food for the dead person, that’s a whole thing.

So, it’s really with you in every stage of your life… literally from birth, when people bring things for the new mom and things that are supposed to be regenerative for her, all the way through

I hope that most people who love food [are] willing to see food in all of those sort[s] of lights. And I think that’s what I’ve always pushed for in my work, is getting people to confront and accept that there are uncomfortable aspects of food and we should allow food to be more than just this very idyllic idea of “Everyone’s happy and we’re eating dinner and everything.”

Check back soon for Part Two!