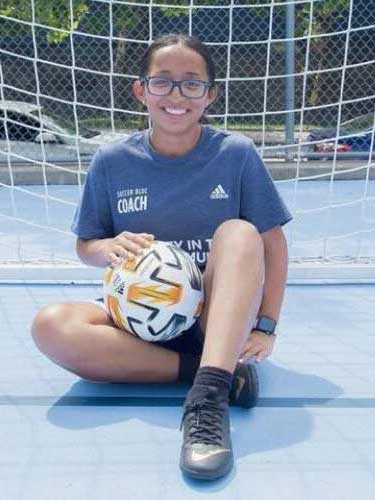 *Audio accessible* “Whenever I would go back and forth from Ecuador to the United States I would always hear [my cousins] say “Mis primos son de los Estados Unidos” with such pride. However, what they don’t understand is the huge identity crisis that so many children of immigrant parents go through.”

In school, we are taught about the creation of America. The “famous Christopher Columbus” discovered America and brought many others escaping persecution. Our founding fathers, George Washington, James Madison, Thomas Jefferson, etc., who created our Constitution, making America so Great. For the first few years of my life, I believed I was a part of the history this “great country” had. That my ancestors somehow had ties to the founding fathers. However, as I started to get older, I noticed that I didn’t really look like the people I was so proud of. I had a brown complexion with dark, oval-shaped eyes, a longer nose, and I was much shorter than almost all my other friends. It took me a long time to process that I wasn’t really a part of the great history that we were so often told in our tiny classrooms; and now that I look back on it, I’m glad I’m not.

I wasn’t the type of person to really interact with people. The only friends I had in elementary school were the ones that I befriended in kindergarten. Stephaine, who I still talk to today, has been my friend since we were 5 years old. We were put together in every class all throughout kindergarten to 5th grade. However, Stephaine was my complete opposite, she was friends with everyone in the school.

During 5th grade, everyone was obsessed with iPods and any new TV show or movie that Disney Channel would play. I, on the other hand, only ever played an iPod when Stephaine would let me use hers, or learned about the shows and movies when I would overhear conversations.

Once, another student named Skye, who was known to talk to everyone during recess, came up to me and Stephaine the first few weeks after fall started. Everyone was talking about the new movie that came out the previous week, “Let It Shine.” In the movie, two best friends work together to get signed to a record label company, only to find out that only one can sign up. Their friendship is put to the test when they both want to get signed to the record label and want a platonic relationship with the producer’s daughter. The show focuses on both conflicts, which made every preteen anticipate its premiering.

Skye had already watched and came to Stephaine to ask her thoughts about it. I trusted both Skye and Stephaine, and at that point was curious as well to find out about this intriguing show that everyone was talking about, so I asked them what happened. But the response I got wasn’t one I expected. Skye responded with, “You’ve never seen Disney Channel before? Have you been living under a rock?!” She sounded so astonished.

It wasn’t the comment that affected me the most, it was the way she said it. I wasn’t the average preteen watching Disney Channel or who played on their iPod. I didn’t even know what channel Disney was on because my mom had only just immigrated here a few years ago. She knew nothing of the American trends kids had here and even if she did, we weren’t in a place where my mom could offer me cable or an iPod. It hit me hard when Skye said that because it made me feel out of place, like I had no belonging.

After that conversation, I would always question why I wasn’t like everyone else, to the point where I started to pick apart our physical differences. Many of my classmates were taller than I was, had a smaller nose, frizzy or blonde hair and their complexion was either lighter or darker than mine. There were times where I would live in my own head and I would think about ways to change my appearance to become more like them. Sometimes I would just find comfort in disassociating from the idea that I was American and resort to my Ecuadorian nationality.

That all changed when I went to Ecuador for the first time.

Right after my mom got her green card, she moved el mar y la tierra (moved the land and sea) to see her parents. We got tickets to go to Ecuador during winter break to spend the holidays with our family. I have mostly fond memories of my first trip there: I met my abuelitos for the first time and all my primas my mom always talked about; I met my tias and tios and my mom’s longtime friends.

Ecuador really did bring out a different part of me because electronics weren’t as big there as they were in the United States. No one had the latest iPod or was watching movies or TV shows any time they could. Everything or anything we could do would be outside. I remember my cousins loved to cook with the leaves, the rocks, and the flowers outside my abuelito’s land. We would always pretend to give out our food to our parents and then we would make chamisas to keep warm. There would be late nights where we would play soccer or ecuavolley; or play hide and seek and hide behind the cows in the huge corn maze my abuelita had. Ecuador was everything I’d imagined, but it was ruined because of my cousin’s snarky comment saying, “You aren’t Ecuadorian, you are American”.

For the longest time, everyone has believed that when you migrate from your home country to the United States you automatically have everything, including money. However, people fail to realize that in order to come to the United States you acquire a huge debt that only accumulates everyday due to the interest rates. Migrants come from all over the world with nothing in the hopes that they will leave the United States with everything. In some cases, it does happen, but more than ¾ of the time it doesn’t. So many people die crossing the border between the United States and Mexico, and if they make it they are coming to a place where they have no job and no place to live.

My mom had countless sleepless nights where she was overworked. My cousin’s comment not only failed to recognize my mom’s struggle but excluded me just like everyone would in the United States. Every time I look back at this, I realize the jealousy behind her words. She was jealous that I was one of the few “American” cousins she had, who had different opportunities than she was offered.

But it didn’t change the fact that she wasn’t the only one who firmly believed it. Everyone always referred to me as gringa (white) when I am and always have been the same brown complexion as them.

It’s been hard being bounced back and forth with the dilemma of being stuck between two cultures that don’t accept you. Even now that I’m older I still struggle with who I am. I think that when I was younger I needed to have a clear explanation of that. But after constantly being pushed around, I now know that I don’t. I could say I’m American or Ecuadorian, but neither defines the type of person I am or aspire to be.